The cosmo bash has been “the launch pad” of some of the most drool-worthy hunks in local tinseltown.  The list includes Rafael Rosel, Derek Ramsey, Luis Manzano, Tom Rodriguez etc etc etc.

I know its more than 6 months since the last cosmo shindig and im just blogging it right now.  I know youve googled his name a hundred times and played his quite dangerous stunt in you tube for more than 50x and add it at your favorite videos.   By the way, if he run for President right now, he would have won the election and probably will place our country back to world map for allowing good looks over brains. I just can imagine…  Pink panties will be flying in mid air on his declaration party.

Just look at his abs… his red red red lips and those eyes that could melt my g-string with a simple wink… haaaayyyy.

Here are some of his pictures i saved on my android just for this post. to cosmo bash creative team, waiting for next years new breed of bachelors

speaking of Daniel Matsunaga – this hot Brazilian model may have his own share of sizzling photos lurking the internet.  Well, i think these photos were taken when he is still starting as a model and of course its a cut-throat industry – you need to stand out and let the gay community notice you.  It may have been his spring board to fame but i guess its all worth it… look on where he stands now… anyway, scroll down dear patrons and you’ll see what i meant.  Just “drool at your own risk”

Filipinos love our expats.  I can still remember when Akihiro Sato was named as the ultimate survivor in GMA7’s local franchise of the said show.  Now, we celebrate the success of another Brazilian Hunk Daniel Matsunaga as he was named 2014 PBB Big Brother ultimate winner.  Even the queen of all media Kris Aquino voted for him!  Maybe his fortune cookie says like this – “You can see how good looks and killer abs can bring great fortune – Confusion”

Nonetheless, this guy is well loved by Filipinos.  I have not read anything bad about him.  Often, you can see him smile (its his job, duh) and very soft spoken even on his interviews.  I felt sad when he left GMA7.  I think he left with a broken heart and jump to TV5.  He stayed for a while on the said network then signed up with the local PBB competition.  Anyway, we can see more of his killer abs on local airwaves at least for now… cause we never know if he will leave us with his millions after fulfilling his duties.  Remember what Aki did after one year in showbiz..  where is he anyway?

Im not a huge fan of Kapamilya network.  I seldom watch their shows since i feel they are a bit monotonous.  The girl likes the boy, boy likes girl, conflict with family then overcome obtacles then wedding day on the finale.  I guess there are a group of demographics who loves fairy tales over and over again.  But of course, i cant help myself adoring some of their stars which include Filipino actor/model/endorser/swimmer Enchong Dee (full name: Ernest Lorenzo Velasquez Dee) was born in November 5, 1988

for more of Enchong Dee, you know what to do guys

I was just updating my post regarding Cosmo Bachelor 2011 when i stumbled upon his manhood – and i instantly fell in love with him and his name is Mark Manicad.

Remember thy name and if ever ill leave this God forsaken world, id utter his name (along with a list of other guys whom i love ssoooooo dearly i.e. Tom Rodriguez, Dennis Trillo etc) Just wonder how long would my sister stand right before my death bed if ever.

anyway, back to my new crush Mark Manicad, i tried to look for more info about him but i guess the cyberspace may have limited knowledge about him. As far as i understand based on his FB account, he does modelling for a living.

i guess this is a mister donut ad.  I also believe he is included on a TVC for Sun Cellular

But i do love the blog post of Vinvinjacla “The Gay Life of Vinvin” (link found below under related articles) and when he finally met Mark.  I think he also joined Mossimo Bikini Competition before but i dont know from what year.  Anyhow, his Cosmo Bachelor appearance were controversial as ever when he paraded the catwalk with no underwear … proof … just scroll down

Stephan Andrei Anlocotan or known thru his screen name Prince  Stefan snagged 2007  First Prince for a local celebrity search aptly titled ‘Starstruck’.  A Fil-Arabian actor born in the 13th of February 1986 has stirred local media with its ‘sixxxling’ pictures scattered all over the web.

His pa-cute days are over and dawn a hunk-in-the-making actor who is much-ready for matured roles.  WOW!

Siyempre, kaakibat na yata ng ganitong daring pictures ang mga gay rumors na minsan ay out of context na rin.  I dont know who stands as his PR man but the pictures alone are a great move to stir up the fantasy of local audience on both side of the pendulum – girls and pa-girls (me included tee hee).  Para mapagusapan ang nanamlay na career. He got a great answer to boot without discriminating the pink community.

What does he responds when people questions his masculinity?  “Hindi yun totoo!  Well, ah, there was a time na parang lagi kong nadidinig, ang dami kong nababasa. Well, hindi kasi lahat ng tao magugustuhan ka, e, you can’t please everybody. I-let go mo na lang. Siyempre for a while, mahe-hurt ka. Well part yun ng trabaho mo, e.”  Good job!  At least, now he knows that this is just a part of his job that he should foresee.

Dahil dyan, i would like to present some of his pictures i found in the web for my dedicated bloggers.  Let us all drool over and support a guy who is comfortable with his own sexuality!!!  Let us support Prince para sa kanyang buong tapang na pahayag at pagbabagong bihis!!!! 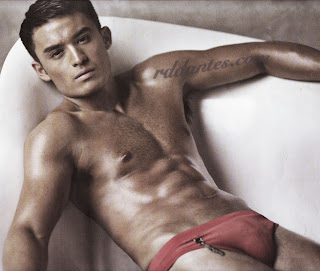 He is one rocker that i LOVE so much.

Aside from the fact that this stud can belt a note or two (thank you for his Kjwan), he packs a delightful enigma that i cant resist but perspire.  I dont know if its the tattoo or his fierce stares but he makes me wanna OOOOOhhhh each time i watch him in TV or on stage.  He makes me devilishly sinful as i ogle on his nice and brusko male persona that anyone cant doubt that his sexuality.  He even gained my full respect when he agreed to star in a gay-themed comedy soap ‘I HEART YOU PARE’, disputing rumors that rockers are homophobic!

My salutations to a guy who is not just a great singer but a great actor as well.  I just hope that GMA 7 gives him dramatic roles as he knew how to act better that any starlets from its caravan.

Cheers to you Marc!

its summer once again and recently, me and my team mates has a bonding weekend in a private pool somewhere in Laguna.  Swimming and booze combined with brotherhood and sisterhood amongst peers.

I simply love the food they served since im not a good cook after all.  All day videoke and pleasurable bantings with friends and colleagues.

Me and my friend William, on the other hand, discovers that yellow light gives great images for drunken fools so we take the opportunity by snapping some.  Here are some and i hope youll like it:

from Kapuso Network unleashes the newest ‘MACHETE’ relive by Aljur Abrenica.  Local actors Cesar Montano and Gardo Versoza previously played the same role which give them a boost on their showbiz careers.  Thou the TV series is short live, Aljurs hot hunky body has created a stir in local tinsel gay town as he flaunts his chest and abs in primetime.